Our Hospital
Back
Saratoga Hospital Names Three to Board of Trustees

Saratoga Hospital Names Three to Board of Trustees 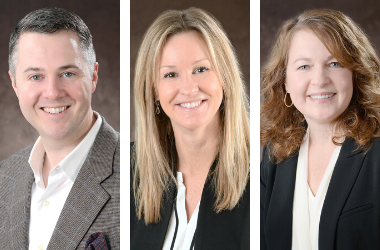 Collins, of Greenfield, is president and CEO of D.A. Collins Construction Company. An industry leader, he chairs the board of trustees of Rebuild New York Now and serves on the boards of Associated General Contractors, Empire State Highway Contractors Association and the Saratoga County Chamber of Commerce. He is a member of the Cystic Fibrosis Foundation board and the advisory board of Leadership Saratoga.

Cushing, of Ballston Spa, is executive director of Franklin Community Center. During her tenure, the center has added and expanded programs and tripled the number of people served. A graduate of Leadership Saratoga, Cushing has been named a Woman of Influence by Saratoga Today and been recognized for her community service by the Saratoga Springs Rotary Education Foundation. She serves on the supervisory committee of Saratoga’s Community Federal Credit Union.

Wood, of Ballston Spa, is deputy superintendent of Shenendehowa Central School District. She has more than two decades of experience as an educator and administrator. Wood holds leadership roles in the New York State Association of Women in Administration and served on the board of the Chamber of Southern County. She is the 2019 recipient of the Excellence in District Administrative Leadership Award from Capital Area School Development Association. She has a doctorate in education leadership from Sage Graduate College.

“All three trustees bring invaluable expertise and have an exceptional track record of service to our community,” Board of Trustees Chairperson Theresa M. Skaine said. “They are welcome additions to a board of volunteers who share the vision and commitment required to meet the healthcare needs of our growing region.”