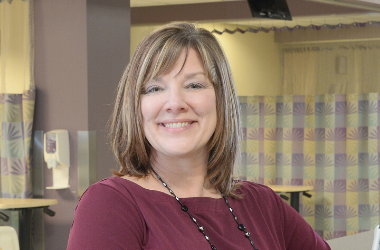 Lisieski has extensive surgical nursing and management experience. She has spent her entire nearly 30-year nursing career at Saratoga Hospital in positions of increasing responsibility and impact. Most recently, Lisieski was director of the operating room and preoperative and post-anesthesia care units.

The new administrative director position is the second created in recent months in response to significant growth in the number and complexity of surgeries and other interventional procedures performed at Saratoga Hospital. In October, Dr. Joseph Bell was named vice president and medical director of perioperative services, the care provided immediately before, during and after surgery.

“When I was building this team, I knew one of my first decisions would be to tap Sharman for this new role,” Bell said. “She is respected and admired throughout our organization for her leadership, clinical expertise and, above all, her commitment to our patients.”

Bell and Lisieski will work together, and with the entire surgical division, to ensure that as Saratoga Hospital grows, it continues to enhance both the quality of care and total patient experience.

Lisieski came to Saratoga Hospital in 1990 as a staff nurse in the orthopedic unit. Four years later, she joined the surgical nursing team, where she has made significant contributions ever since. Lisieski played a key role in Saratoga Hospital’s successful effort to become the Capital Region’s first hospital to earn the prestigious Magnet® designation for nursing excellence—a distinction the hospital has maintained since 2004. She also was involved in the design and development of the Surgical Pavilion that opened in 2015. As a member of numerous hospital committees, Lisieski influences policies and practices for infection prevention, pharmacy and therapeutics, the surgical experience and care environment.

A graduate of Adirondack Community College, Lisieski has a bachelor’s degree in nursing from Russell Sage College in Troy. She has been a certified perioperative nurse (CNOR) since 1996.