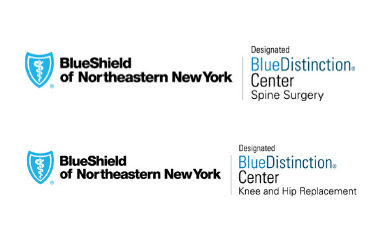 Saratoga Hospital is the only Capital Region facility to be recognized as a Blue Distinction Center for Spine Surgery for meeting both quality and cost-effectiveness measures.

“Blue Distinction Centers earn the designation, in part, by providing care that results in fewer complications and readmissions. That’s important information for patients who are deciding where to have their spine surgery or knee or hip replacement,” said Dr. Richard Falivena, vice president and chief medical and physician integration officer at Saratoga Hospital.

“Patients see that we are a Blue Distinction Center—and that we’ve earned other quality designations—and they know they can turn to Saratoga Hospital with confidence.”

Blue Distinction Centers are nationally designated healthcare facilities that show a commitment to patient safety and better health outcomes, based on objective measures that were developed with input from the medical community and leading accreditation and quality organizations.

For more information about the program and a complete listing of the designated facilities, go to www.bcbs.com/bluedistinction.