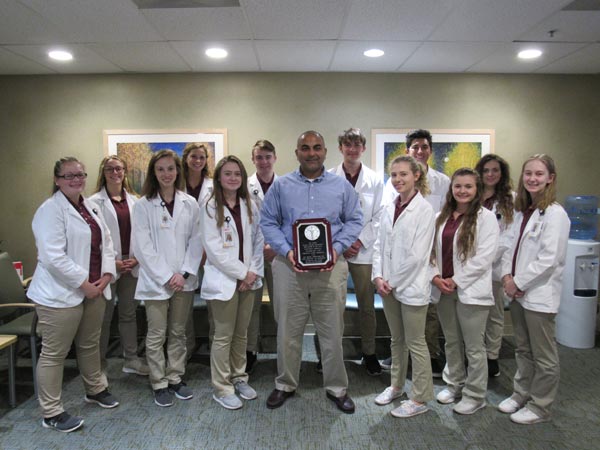 “We are all truly touched and honored to receive this award,” pulmonologist Numan Rashid, MD, MPH, said. “These are extraordinary students, and it was certainly a pleasure to show them the work we do here, from the complex medical challenges to the rewarding patient care. I have no doubt each of these students will succeed in whichever medical program they choose.”

The Pulmonology and Sleep Medicine team provides care for patients who have acute or chronic lung disorders, including cancer, emphysema, and other lung disease and conditions. The program is also home to the Saratoga Hospital Center for Sleep Disorders, with its state-of-the-art sleep lab, where patients can be evaluated and treated for conditions including sleep apnea, insomnia, narcolepsy, and a full spectrum of sleep disorders.

The mentorship award was presented by Jared Everleth, a senior at Schuylerville High School, on behalf of the New Visions Class of 2019. The Class collaborated on the reasons they chose the Pulmonology and Sleep team for the award.

“The entire staff was very welcoming,” Everleth read from the Class’ prepared remarks. “From their personability, humor, enthusiasm, love for what they’re doing, and relationships with the patients to educating us with diagrams, models, and previous patient cases, we thought each staff member in your office exemplified the qualities of an amazing mentor.”

Everleth added that Dr. Rashid, specifically, had been such a positive influence that he decided to change his career path to Pulmonary Medicine. Everleth said of Dr. Rashid, “He is the type of healthcare provider that we all aspire to be.”

The New Visions Health Careers Exploration is a program within the Washington Saratoga Warren Hamilton Essex Board of Cooperative Educational Services (WSWHE BOCES) founded in 1998. It provides medical career-minded high school students the opportunity to rotate through a variety of medical practices. Students shadow and learn from physicians and other clinical staff during rotations. They also have additional classroom time with the instructor and clinical coordinator of the program, Lisa Hart.

“Without the clinical experience, there would be no New Visions program,” said Hart. “We are deeply grateful to Saratoga Hospital, Wesley Health Care Center, and the other providers who open their space and time for these students. It is with their help that our students leave the program with extensive medical knowledge of anatomy, physiology, medical ethics, medical terminology and law, well-prepared for post-secondary education and productive healthcare careers.”