SARATOGA SPRINGS, NY, August 5, 2020—Saratoga Hospital is one of the first in the Capital Region to offer robotic arm-assisted surgery for hip and knee replacements. The cutting-edge robotic technology, known as the Stryker Mako System, enhances patient care by ensuring a higher level of precision and accuracy during surgery.

Six Saratoga Hospital orthopedic surgeons are trained in using the Mako system for total hip replacement and partial and total knee replacement surgeries. As the population ages, demand for these surgeries continues to increase. 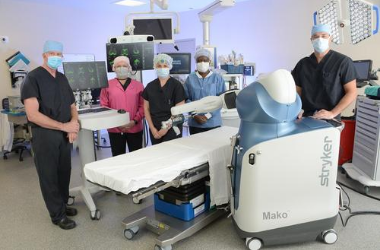 “With the Mako System, our patients have access to some of the most advanced and effective surgical technology,” said Dr. Joseph Bell, vice president and medical director of perioperative services at Saratoga Hospital. “That can improve their surgical outcomes and have a positive, long-term impact on their health and quality of life.”

The Mako System uses CT-based 3D modeling software that allows surgeons to create a personalized joint replacement plan based on each patient’s unique anatomy, the size of their implant and its orientation and alignment. During the procedure, the surgeon uses the robotic arm to place the implant as precisely as possible, in a position that reflects the patient’s natural movement patterns.

Studies show that the Mako System can increase surgical precision and help protect soft tissue and ligaments. In addition, six months after surgery, patients who had surgery performed with the Mako System have reported less pain and greater satisfaction than those who had conventional joint replacement surgery.
***