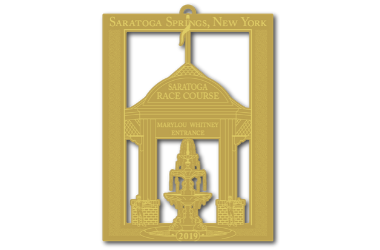 “Marylou was so impressed by the quality of care she received at Saratoga Hospital,” John Hendrickson, Mrs. Whitney’s husband, said. “I know she would have been humbled and honored to have the hospital’s holiday ornament dedicated to her memory.”

The twenty-fourth in the collectible series, the ornament features the Saratoga Race Course clubhouse entrance, renamed in Mrs. Whitney's honor. As is tradition, the ornament captures the spirit of Saratoga. Previous ornaments depicted historic places, buildings, statues, or iconic areas or pastimes. The artwork is by Saratoga Hospital surgeon Joseph Bell, MD, vice president and medical director of perioperative services.

“Mrs. Whitney’s loss reverberated throughout the city,” Dr. Bell said. “I could think of no better representation of the heart of our community than this remarkable woman. Her kind nature and philanthropic support of our hospital and so many other local charities epitomizes the holiday spirit. It is fitting to celebrate her life and passion for giving with the hanging of this ornament each holiday season.”

Mrs. Whitney played instrumental roles in the inception of the Saratoga Performing Arts Center, National Museum of Dance, Saratoga Backstretch Appreciation Program, and Centennial Park (renamed Marylou Whitney Park), as well as the revitalization of racing, the Saratoga Race Course, and the National Museum of Racing. She was a beloved citizen of Saratoga Springs.

The limited edition, 24K gold on brass ornaments are available at $20 each. For more information on purchasing this or a previous ornament, please visit saratogahospitalfoundation.org.