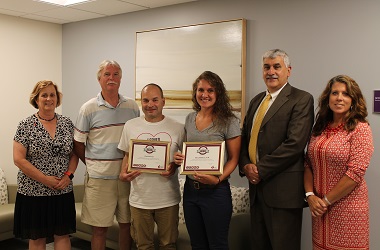 “David and Mary did not hesitate that day,” said Angelo Calbone, president and CEO of Saratoga Hospital. “They were on a sidewalk, they had no equipment, David had never used his CPR training before, Mary only happened to be driving by, and they both feared they may have been too late. None of that held them back, and, it turns out, their determination and CPR training were enough. Stephen Aylward is alive today because of these two heroic individuals.”

The American Heart Association’s Heartsaver Hero award recognizes passersby that have stepped in to perform cardiopulmonary resuscitation (CPR) during an emergency. Nominations for the award are welcome on behalf of those who have done their best to help save a life through bystander CPR, regardless of training or outcome.

“This is why the American Heart Association works so hard to teach CPR,” said Theresa Petrone Butts, chair of the Capital Region Advisory Board of the American Heart Association and Leader of IT Vendor and Budget Management at MVP Health Care. “Stephen Aylward’s life was saved because David and Mary had CPR training. They didn’t think, they simply acted, and those actions kept Stephen’s family from experiencing a heartbreaking loss. Congratulations to David and Mary, and thank you both. They truly are heroes.”

On an early spring morning this year, Conza, a former Naval Reservist, was walking to meet his ride to work, when a jogger, Stephen Aylward, went by him. Seconds later, Conza heard Aylward collapse, and he immediately ran to his side. Aylward didn’t seem to be breathing. Conza tried to call 911 but could not get through, so he began to perform CPR. About 10 minutes later, McMurry, who was driving by on her way to work at Saratoga Hospital, pulled over to help. By then, a bystander reached 911. At one point, McMurry couldn't find a pulse, but told Conza they would keep going. They were both feeling the strain but, even though Conza had been performing CPR for 20 minutes, they didn’t stop until first responders arrived and took over.

Aylward, a 52-year-old former professor of radiology and founder of Kitware, headquartered in Clifton Park, was taken to Saratoga Hospital for his treatment and procedures in the hospital’s Whitney-Hendrickson Cardiovascular & Interventional Suite. Today, the North Carolina resident, having regained his strength and health, is back to his normal life and fitness routine. He and his family are extremely grateful to Conza and McMurry for their quick-thinking and perseverance to keep him alive until help arrived.

About Saratoga Hospital: Saratoga Hospital is the Saratoga region’s leading healthcare provider and the only acute-care facility in Saratoga County. The hospital’s multispecialty practice, Saratoga Hospital Medical Group, provides care at more than 20 locations, ensuring easy access to programs and services that can have the greatest impact on individual and community health. Saratoga Hospital has maintained Magnet designation for nursing excellence since 2004. Through its affiliation with Columbia Memorial Health and Albany Med, Saratoga Hospital is part of the largest locally governed health system in region. For more information: www.saratogahospital.org or www.facebook.com/SaratogaHospital.