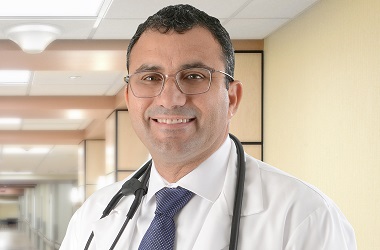 Amsalem comes to Saratoga Hospital from New York City’s Montefiore Medical Center and Mount Sinai Saint Luke’s Hospital. He was a senior interventional cardiologist on staff at both facilities and has performed more than 1,000 percutaneous coronary interventions, a procedure formerly known as balloon angioplasty with stenting to open clogged arteries in the heart.

The interventional team is led by Dr. Rocco Grella, medical director of interventional cardiology at Saratoga Hospital. In addition to Amsalem, the team includes cardiologists from Albany Med and nurses and technologists with specialized cardiac-related expertise.

“We have assembled an extraordinary team, purchased the latest technology and collaborated with our affiliate, Albany Med, to provide higher-level cardiac care in our community,” said Jeffrey Winacott, administrative director of Saratoga Hospital’s cardiovascular service line. “The resulting cardiology program is yet another example of how our affiliation with Albany Med helps us fulfill our commitment to the Saratoga region.”

Amsalem earned his medical degree from Ben Gurion University of the Negev School of Medicine in Israel. He completed an internship, residency and cardiology fellowship at Sheba Medical Center in Israel, followed by a fellowship in interventional cardiology at Lenox Hill Hospital in New York City.

Amsalem is board certified in internal medicine, with subspecialty certification in cardiovascular disease. He is in practice with Saratoga Hospital Medical Group – Cardiology and sees patients at 254 Church St. in Saratoga Springs and at Saratoga Medical Park at Malta.

***
About Saratoga Hospital: Saratoga Hospital is the Saratoga region’s leading healthcare provider and the only acute-care facility in Saratoga County. The hospital’s multispecialty practice, Saratoga Hospital Medical Group, provides care at more than 20 locations, ensuring easy access to programs and services that can have the greatest impact on individual and community health. Saratoga Hospital has maintained Magnet designation for nursing excellence since 2004. Through its affiliation with Columbia Memorial Health and Albany Med, Saratoga Hospital is part of the largest locally governed health system in the region. For more information: www.saratogahospital.org or www.facebook.com/SaratogaHospital.